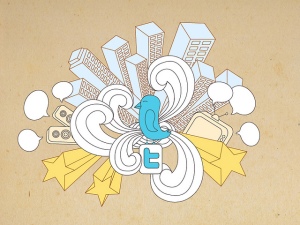 When Twitter first flew into my life in 2008, I thought it was a joke. And with people using words like “Tweeps” and “Tweet-ups” I was rolling my eyes. Now, I’m sure it’s no less than 100 times a day I check @writingthesurf. It took me several months before I could take it seriously. It took nearly a year before I saw how people were using it in their job searches, without even knowing that’s what they were doing.

Being a Recruiter, at that time, I was always looking for ways to connect with my clients and new web development (my speciality) talent. It seemed like Developers were embracing this Twitter-thing and networking away. It was different than Facebook or Linkedin. Less formal, and ironically, more telling. Even though people weren’t sharing their photos or job history, they were talking about technology, innovation and they didn’t need to “friend” anyone or know their email address to connect. Anyone I intended on having a relationship with I would find on Twitter and follow them. In 2009 the list wasn’t terribly wrong. But it sure grew fast!

This platform changed the way I recruited. But even bigger, it changed the entire job hunt.

Recently I interviewed 10 different Web Developers for a series on my company blog called How To Become a Front End Developer. When asked how they find new jobs and network, every single one of them said social media. 9 of 10 said Twitter. It’s not just Developers, there are many other professions using Twitter to network and find new opportunities. (And if you’re the one hiring these people and you’re not on Twitter, you better re-think your hiring process.)

Developer or otherwise, think about the kind of people you want on your team. Regardless of the language you want them to be proficient in, content you want them to create or pieces you want them to design, you need them to be resourceful and well networked. Those two things make a strong team. Not to say if you don’t have a team full of tweet-crazed players, you’re in trouble. But if you’re looking to add to your team, Twitter should probably be your first stop.

I’m often asked “Twitter or LinkedIn?” It depends on what you’re looking for. If I’m researching skill set, where someone has worked or who recommends them, LinkedIn. If I’m trying to learn about a human being and build a relationship, Twitter. All day. You gain a better understanding of who they are, as a person, what they’re passionate and knowledgeable about and who they engage with. All of those things are important if you’re hiring someone. But they’re equally as important if you’re going to work for someone.

If you’re looking for a job or looking to hire someone, beef up your Twitter activity. Follow people you can learn from. Create lists to help you monitor and organize the people you follow. Most importantly, genuinely engage with the community you want to tap into. Even though I’m no longer a Recruiter, I still connect with new people every day on Twitter. Many of my former talent and clients are now my friends and part of my network. It’s not about the right now, it’s about the relationship down the road.

Have you found a job or hired someone via Twitter or social media? I would love to hear about it!